Jane Ewart Gott who is my 3rd Great Grandmother was born in 1825 in Leeds, she was one of 9 children born to William Gott and Margaret Ewart. One of Jane's brothers was John Gott who was a Bishop of Truro.

I have been to the Brotherton Library in Leeds University where there is a mountain of family and business papers related to Jane's family, namely Benjamin Gott who was Jane's Grandfather (My 5th Great Grandfather) who became very prominent in Leeds. There was some very interesting items to look through and i was engrossed for days in piles of old papers. Among the items were diaries, sketches, letters and family trees and the most amazing thing was that most of the documents have probably not been looked at since they were deposited there, the smell and feel of the papers was pretty special, especially knowing that many of the papers were handwritten by my ancestors many years ago, thinking about the fact when we do actually write things today it usually gets thrown away soon after, in years to come we will not have records of individuals handwriting as everything will be on computers. Some of the little facts i gained about my family members was amazing - like what time Benjamin left for work in the morning from his wife's diary, or what was served for dinner on a particular date from the shopping list given to the housekeeper, 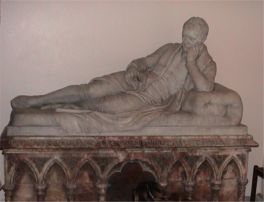 Benjamin Gott started as an apprentice on New Years day in 1780 at the firm Wormald & Fountaine a Woolen Merchants. Five years later he became a Junior Partner and the name became Wormald, Fountaine & Gott. By 1790 Benjamin Gott was running the Business which he would be in control of for nearly half a century. The name changed over the years depending on who was partnering him. Benjamin revolutionised the Millen industry by being the first to introduce steam power and Machinery to the factory. The business expanded covering a large part of Armley and Leeds. One of his mills in armley is now The Leeds Industrial Museum which is a very good museum, as well as fascinating to me as it had belonged to my 5th Great Grandfather.

On the 30th November 1790 Benjamin Married Elizabeth Rhodes. They met at a ball held at The Dragon Inn in Harrogate. She was the daughter of William Rhodes a Landowner of Badsworth Yorkshire. Benjamin and Elisabeth lived in Park Lane Leeds which is now the site of St. Anne's the Catholic Cathedral. Benjamin bought Armley House on the edge of Armley Park for his Widowed Mother-in-law (Elizabeth Rhodes nee Brook) to live in, when she died in 1816 he redeveloped Armley house as Armley or Gott's Mansion for his and his families own use.

He became a very prominent figure in Armley taking a keen interest in the local parish churches, building alms houses. He was active in local politics and in 1799 became Mayor of Leeds, he was also a leading and enthusiastic patron of the arts. On his death he left vast amounts of money to various causes, Gott's mansion and park were left to the municipal council on a long term lease and are gradually falling into disrepair.

We visited Armley Church, and discovered the family graves that originally been part of the church in a crypt, but when the church was rebuilt in a slightly different place, the graves were left in place and therefore out in the open.

This Statue of Benjamin Gott was commenced in 1832 as a monument and completed a year after his death. It is the work of Joseph Gott a distant cousin and was shipped over from Joseph's studios in Rome. The inscription below it reads as follows:
Benjamin Gott esq. of Armley house

Endowed with talents to dignify every relation of life he maintained with inflexible uprightness the character of a merchant with impartial justice the office of a magistrate, and the unshaken confidence the warmth of friendship. He was always ready to promote the welfare of the town of Leeds and the advocates of its literary scientific charitable institutions found in him a judicious advisor and generous patron under the gifts of health prosperity and length of days he exhibited the powers of divine courage in the pure benevolent and holy principle by which he sought to share his conduct and relying for salvation only on the merits of his redeemer he calmly resigned his soul into the hands of a merciful creator on the 14th February in the 78th Year of his age. His remains are interred in a vault in this church.

The memorial was moved to here (St Bartholomew's, Armley Parish Church) in 1890 from the old chapel which used to be in the present Graveyard