As my maiden name was Neal this was the branch where I first began my research.

My father is Malcolm Neal, and is only one of three children. His father Glan Neal (my grandfather) was one of two children. His father was Arthur Neal (my Great Grandfather) and I had been told he came from a large family but based in a very small village. After a few enquiries we paid the village a visit to discover more about my Great Grandfathers family. The village was called Bignor.

Bignor is a small pretty village, close to Arundel in West Sussex, nearby villages include Sutton, Burton, and Bury, the registration district is usually described as Petworth. The name of the village comes from the "Big Nor" which is the hill where the South Downs Way runs, the area is steep in history with a Roman road running close by and a Roman Villa (more details further down) and the legend of the Bignor Dragon!

My Great Grandfather Arthur Thomas Neal was born in this village in 1888 and was one of 13 children. I have been able to go back on this line, following the surname Neal back to John Neal born in the village in 1731. I have information on a large amount of Neal's in this area previous to 1731 but unfortunately have been unable to definitely link them to my Neal's.

The descendant tree of John Neal (born 1731) is enormous due to the fact that most generations had up to 13 children and that some cousins married creating a very confusing tree. it is also interesting to note that Neal can also be spelt with a "E" on the end - Neale and different descendants of John Neal spell it either way.

Bignor Church - picture below, and its grounds (the graveyard) are very well preserved, and its quite a peculiar feeling walking around the church and the gravestones knowing that all my ancestors had been there. 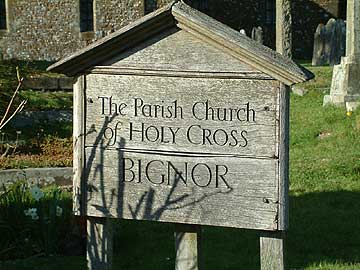 I was able to go inside the church and viewed the list of churchwardens and some of these I have identified as being my family members. I have also visited the church at Sutton, which is quite close and where one branch of the family were based.

The records for Bignor and surrounding areas are held at Chichester Records Office , where i have done quite a bit of my research, I have been able to search the parish records and the bishops transcripts on microfiche for the area, as well as been able to look up items like "Bignor School" records and see the entry dates for my great grandfather at school etc.. I can also recommend a good pub for the lunch break as the office closes for lunch!!

Another closely related branch of my family is the Tuppers - my great grandfather Arthur Thomas Neals maternal grandmother was Emma Tupper (born 1820 Bignor). The Tuppers have lived in the Bignor Area for many many years and also have descendants in many places - one branch emigrated where they became some of the original settlers in America, and there is a Tupper Association for this branch (and had to giggle when i relaised one branch were the Tuppers of Tupperware!)

My 4th great grandfather George Tupper (born 1750 in Coldwaltham,nr Bignor) was ploughing his field in 1811 when his field when his plough struck something, he called in a local archaeologist and they proceeded to unearth a Roman villa. At the record office I was able to read the transcripts of the archaeology dig and the letter between the archaeologists (John Hawkins and Samuel Lysons), however the Tupper family have maintained ownership of the land to the present day, and in 1814 the site was opened as a tourist attraction and is still known for its importance as an archaeology site. The site is well worth a visit not just for all the roman mosaics but also its beautiful surroundings with a picnic site, a short drive away and you can be on the coast for Bognor or Brighton etc. Many Thanks to Jack Tupper for the personal tour of the Villa, which I thoroughly enjoyed with memebers of my family and it was fascinating to find some of my research on the Tuppers in the Introduction area of the villa. In 1850 the land was tithed, and on display at the roman villa are copies of the tithe maps and i have been able to identify which land belonged to my family, and when visiting the area working out which areas these are..

Within these branches (Neals, Tuppers and also the Gartons)there is an unusual name of Nimshi, which I have been able to follow through a few generations, as far as i know there are currently no family members with this first name and I have never seen it in any other family - so if your name is Nimshi - please email me as you may be connected!

I am in touch with other descendants of the Neals and Tuppers but would love to hear from you if you are connected in any way.

Other main surnames on this branch are the Sotchers, Langley,Mann, Gadd, White and Garton. On all of these lines as i go back in time appear to still be farmers in the Bignor Area.

I am also interested in the origins or possible reason for the middle name of my Grandfathers younger brother - Roy Neal (who died at the age of 16) which is "Osterley" which appears a little out of context with other names in the family - although there was a Noah Neal!

Julie Cheeseman has an extensive family website with ancestors based in sussex, and we join up back in the 1700s.